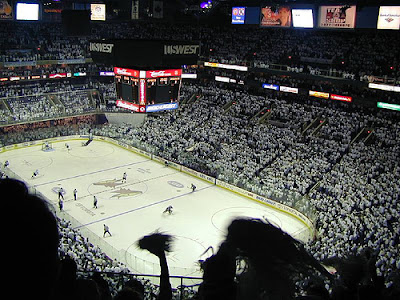 The picture above is the America West Arena above and it had many of the same issues that the Barclays Center will for hockey.  The Coyotes were able to play in this arena from 1996 to 2003 and I think the Islanders could play at the Barclays Center for a temporary period of time as is.  If the Islanders do move to Brooklyn there probably be a trial run of a few seasons and if its successful the arena will be altered to work better for hockey.  Plus the team would still be talking to Queens, Suffolk, or anyone else who wants the team in case Brooklyn is a disaster.  Below is a description of how America West Arena worked for hockey.  In hindsight the  the Coyotes probably would of been better off staying in Phoenix with a more favorable lease and renovating America West for hockey.  When they moved to the city of Glendale they lost a good number of fans they built while they were in Phoenix.  One advantage the Islanders do have over the Coytoes when they first moved to Arizona is an established fan base.  The Islander fan base will suppor this team in Brooklyn if they now this is our last hope of saving our team from Quebec, Seattle, Kansas City, Saskatoon, and anyone else interested in an NHL team.


When the Winnipeg Jets NHL franchise announced their intention to move to Phoenix as the Coyotes for the 1996–97 season, the arena was quickly reconfigured for hockey. Unlike most multipurpose arenas, America West Arena's sightlines were not designed with a hockey rink in mind. While its tight seating configuration suits basketball very well, it made it difficult to fit a standard NHL rink onto the floor. The lower level had to be sheared in half to fit the rink and create retractable seating.

As it turned out, the result was completely inadequate for the Coyotes. Most notably, a section of seats in the upper level actually hung over the boards, obstructing the view from over 3,000 seats. In those areas, a good chunk of the view from beyond the top of the face-off circle was cut off.[9] The problem was so serious that after the team's first season in Phoenix, the team had to curtain off some seats in the areas where the view was particularly obstructed, cutting listed capacity from over 18,000 seats to just over 16,000.

The Coyotes added a second video board in an area where the view was particularly obstructed, and also put up numerous proposals to improve sight lines in order to boost capacity back over the 17,000 mark.